Have You Ever Met a Boondocker?

The first workaholics I was ever exposed to lived across the street from me, when I was growing up.

The man, who I’ll call James, slaved at the Dairy Queen restaurant he owned. His wife was also a marathon toiler, at both the Dairy Queen and at another food shop that they ran in the local mall. 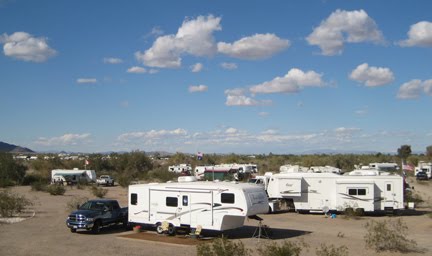 At 45, James and his wife sold the Dairy Queen and retired.  They built a nice home on the Shuswap Lake, but for more than 25 years, they’ve spent their winters in Arizona, boondocking, while spending their summers in their British Columbia home.

I didn’t realize what a culture it was.  Loads of Canadian retirees drive south for the winter, and set up their RVs in the desert, on government land that doesn’t cost them a penny.  With solar panels on the rooftop, they can charge their batteries, kick back, live mostly off solar power, and socialize with the fraternity of boondockers they often hook up with each winter—forming contingents of boondocking camps.

When James, his wife, and the collective batch of RV vagabonds get tired of a desert strip, they pack up and—caravan-style—drive off to another locale.

My parents just drove back to Victoria, B.C. from a trip they took to Arizona, where they hooked up with their old neighbours on an Arizona desert.  I had never heard of boondocking before this morning.  And I was fascinated to learn about it.  A look online suggests an entire sub-culture of boondockers, most of whom appear to be minimalistic and adventurous.  Books on full-time boondocking can be purchased, and of course, there are bloggers, such as your RV lifestyle, offering a peak at the lifestyle, as well as a number of useful tips.

It’s the kind of thing my wife and I could experience.  I’m not sure if we could do it full-time, year after year, but for a single winter of adventure, with mountain bikes and climbing kit (my wife’s a keen rockclimber) we could end up with plenty to do…..and explore.

What about you?  Does it sound interesting?  And have you ever met a boondocker?

I’m a financial columnist for Canada’s national paper, The Globe and Mail, as well as for AssetBuilder, a financial service firm based in Texas. I’m also the author of Millionaire Teacher: The Nine Rules of Wealth You Should Have Learned in School and Millionaire Expat: How To Build Wealth Living Overseas. My mission is to educate, motivate and inspire people on basic retirement planning and best practices for investing, using evidence-based strategies. I'm happy to comment on your questions.

This site uses Akismet to reduce spam. Learn how your comment data is processed.

Why not avoid the delivery wait, save some money & trees and read these books electronically? Immediately!

Read on a Kindle, or on your smart phone using the free Kindle App ( IOS & Android )

Borrow from an Online Library

You can also borrow Andrew’s Books from eLibraries for Free!

Make an account with OverDrive, then get the free OverDrive app. ( IOS & Android )

Many people aren't comfortable talking about money. It's not usually a conversational dinner-time topic, and its principles are rarely taught in schools. My goal is to have a "conversation" about it here, on this blog. If you read something you find intriguing, please comment or ask your questions! I am also the author of the books: Millionaire Teacher: The Nine Rules of Wealth You Should Have Learned at School & Millionaire Expat: How To Build Wealth Living Overseas. If you'd like to find out more about my investing philosophy, read my "Nine Laws to Financial Freedom." Sign up for it and a bonus Investing Strategy below. Free!

The Archives by Month